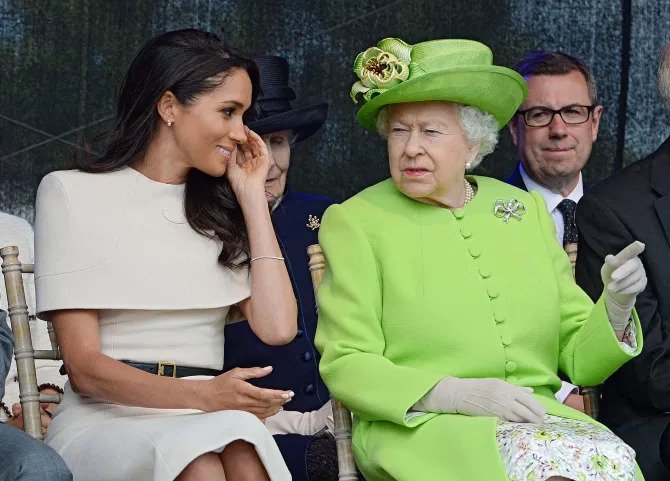 According to reports, Prince Harry and Meghan Markle are doing everything they can to keep the Queen happy.

Prince Harry and Meghan Markle’s child might very well be the ‘peacemaker’ to settle her parents’ protracted conflict with the royal family, as royal family fans prophesied. An insider told US Weekly that the Duke and Duchess of Sussex are doing their best to keep things cordial with the royal family after the birth of their second child.

“It’s no secret that the last year Harry and Meghan have been at war with the royals,” a source told Us Weekly of the tense relationship between the former senior royals and their relatives. “All is not forgiven, but after all the backlash regarding their interviews—which by the way, the pair have no regrets about—they’re trying their utmost to maintain a good relationship with the queen in order to keep the peace.”

The interviews in question were Harry and Meghan’s tumultuous tell-all interview with Oprah Winfrey, Harry’s explosive Armchair Expert podcast chat with Dax Shephard, and the 38-year-old former senior royal member’s many shocking revelations in his and Oprah’s moving mental health docuseries The Me You Can’t See.

With their daughter’s name, the Duke and Duchess paid respect to Her Majesty and Harry’s late mother, Princess Diana.

Following the baby’s delivery, the monarch was the first to get a video chat from the pair. “The Duke spoke with his family in advance of the announcement, in fact his grandmother was the first family member he called. During that conversation, he shared their hope of naming their daughter Lilibet in her honor. Had she not been supportive, they would not have used the name,” a spokesman for the Sussexes stated in reaction to a BBC report saying the Queen was “never asked” about the child’s name.

According to reports, Queen Elizabeth is “overjoyed to be a great-grandmother again” to her 11th grandchild.

“Lili is named after her great-grandmother, Her Majesty The Queen, whose family nickname is Lilibet,” according to a statement on their Archewell website.

“Her middle name, Diana, was chosen to honor her beloved late grandmother, The Princess of Wales.”

Meghan and Harry are allegedly diverting their attention away from all of the media headlines and back to their family’s future now that their second child has arrived. Meghan has been in “good spirits and absolutely glowing” after giving birth, according to a friend of the royal couple.

Meghan wanted to be able to enjoy her pregnancy in secret after enduring the “unbearable grief” of a miscarriage last summer, according to their pal, who added, “They just took it one day at a time, they wanted to have this moment for themselves.”

Furthermore, according to US Weekly, Harry and Meghan want to “to avoid being demoted as a royal at all costs and at worst-case scenario, losing their titles.” Harry and Meghan are permitted to maintain their Duke and Duchess titles after stepping down from their royal responsibilities, but they will no longer be styled as His Royal Highness or Her Royal Highness. It’s worth noting that Harry has kept his position in the royal line of succession, as well as his children.

The advent of Lilibet has sparked speculation among royal specialists as to whether it would aid Harry and Meghan in healing their relationship with the royal family.

One insider claimed that Montecito is very quiet and perfect for them. They are close to the beach, which they enjoy, and they also have friends in the neighborhood that they spend time with. They spend a lot of time at home with Archie but have also managed to get a few date nights in as well. This feels like their first proper home together, because they were able to find a house that they both love. It’s nice to see them enjoy life.” Meghan just enrolled 2-year-old Archie in a morning program at a preschool a couple days a week, in addition to all of the preparations they’ve been doing in anticipation of Lilibet’s birth.

The source said, “He is big enough that he is now starting to have his own life too. He enjoys preschool and outdoor activities.” Referring to the addition of their daughter to their family, the source concluded, “They’re so happy. This baby solidifies that they are creating roots here in the States. It’s like a clean slate—almost like a new beginning.”