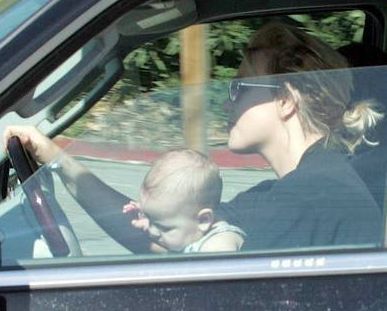 Britney Spears’ only desire was to go out for a cup of coffee. So she strapped baby Sean Preston into his car seat, got the ever-present bodyguard, and drove to Malibu’s Starbucks. Britney pulled Sean out of his car seat and cradled him in her lap while her bodyguard walked into Starbucks to grab her coffee. The paparazzi crowded the exterior of her car as usual, trapping her and her son Sean inside with a “physically aggressive paparazzi” outside. Britney sped out with Sean on her lap as soon as her security returned to the car, fearful for her baby’s safety.

The 24-year-old’s carelessness was criticised by driving motoring yesterday. 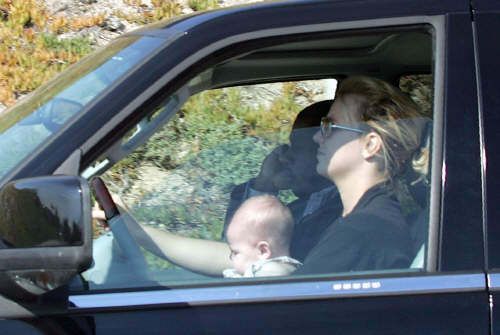 She was putting her child “in a potentially lethal situation,” according to an AA Motoring Trust official. He continued, “With a baby on her lap and her hands on the steering wheel, she is offering the child no protection whatsoever. Had she crashed, the baby would have been propelled at massive force against the airbag, causing very serious injury.”

Britney Spears said that driving a car with her young boy on her lap was a “mistake” yesterday (Feb. 9), but the agency that shot the event refuted her claim that photographers were hounding her.

Spears was photographed behind the wheel of her sport utility vehicle on Tuesday, cradling her five-month-old baby, Sean, on her lap, according to photos published in the New York Post and elsewhere. In the front passenger seat, a man identified as her bodyguard is seen next to her.

Spears said she did it after a “horrifying, frightful encounter with the paparazzi.”

“I had a horrifying, frightful encounter with the paparazzi while I was with my baby,” Spears stated through her spokesperson. She compared Monday’s encounter to a situation last summer when she was “trapped” in her car by a swarm of photographers.

“I instinctively took measures to get my baby and me out of harm’s way, but the paparazzi continued to stalk us, and took photos of us which were sold to the media,” she said.

“I love my child and would do anything to protect him.”

The images may have piqued the interest of the county Department of Children and Family Services, however a spokeswoman for the department declined to comment on the Spears incident.

“We don’t say who, what, or if we’re investigating,” said Stu Riskin, a spokesperson for the department.

Spears’ representatives claimed in October that photos of her and Sean taken during a session had been stolen. They were put up on the internet, but she threatened legal action, so they were taken down. The usage of the images would be a “invasion of privacy,” according to a statement released at the time.

Children must be fastened in a child-safety seat until they are at least 6 years old or weigh at least 60 pounds, according to California law (27 kg).

Kevin Federline, Spears’ spouse since September 2004, is the father of the child.