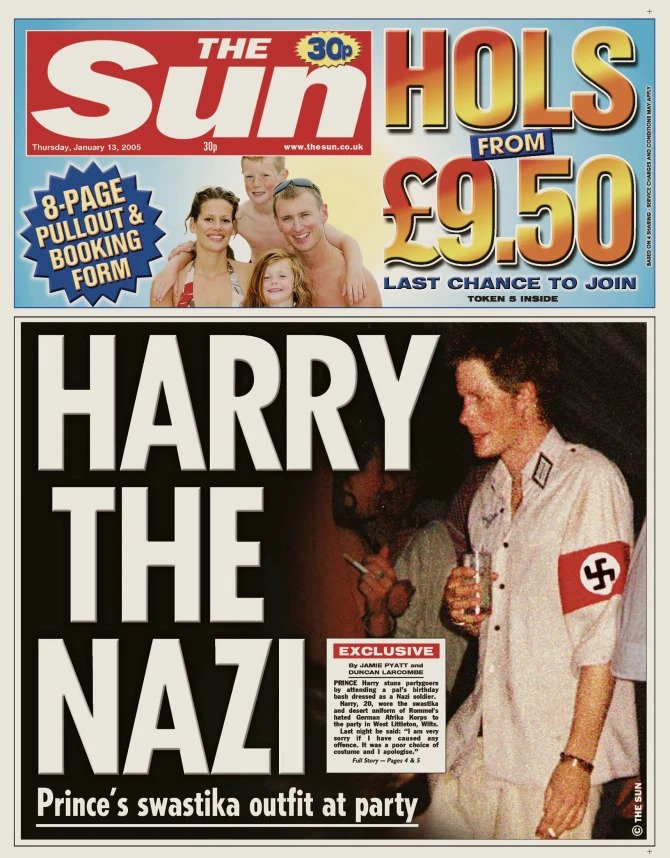 Prince Harry of the United Kingdom has apologized for wearing a Nazi uniform to a party, acknowledging he made a mistake and stating, “I am very sorry if I caused any offense.”

A picture of a costumed Harry was published in the Sun, a tabloid daily, on Thursday.

“Harry the Nazi,” the headline reads.

The Sun broke the shocking story in January 2005. Credit: Reuters

The 20-year-old Prince Harry appears to be dressed in a German desert outfit and a Nazi armband. He also has a beer and a cigarette in his hand.

Prince Harry is third in line to the British throne after his father, Prince Charles, and his brother, Prince William.

According to Clarence House, Harry said in his statement that he embarrassed the royal family. “It was a poor choice of costume and I apologize.”

“Prince Harry apologized tonight after he was pictured on the front page of The Sun newspaper in a Nazi soldier’s uniform which he wore to a fancy dress party,” the press office stated.

However, there has been a demand for the prince to issue his own public apologies.

The picture stunned Jeff Barak, editor of the Jewish Chronicle, according to Sky News.

“Dressing up as a Nazi is nothing to laugh at,” he said. “Prince Harry made a bad mistake.”

Jewish organizations and politicians in the United Kingdom chastised Harry over the action on Thursday.

“I think a lot of people will be disappointed to see that photograph and it will cause a lot of offense,” said Michael Howard, the leader of the opposition Conservative Party, who is Jewish.

However, they were “pleased” that he had apologized for the event.

“It was clearly in bad taste, especially in the run-up to holocaust memorial day on the 27th of this month, which the Royal Family will be taking a leading role in commemorating.”

“The fact that the palace has issued an apology indicates that this was a mistake by the prince,” said Rabbi Jonathan Romain, a spokesperson for the Reform Synagogues of Great Britain. “But having being given, the apology should now be accepted.”

“This young man has got to come up front and be seen in person making an apology,” remarked the Queen’s former assistant press secretary, Dickie Arbiter.

The Sun’s Managing Editor Graham Dudman informed media outlets that the Sun held the rights to the pictures and that they must be credited for their usage.

Harry’s picture was taken at a party attended by 250 people, including his elder brother, Prince William, who dressed up as a leopard.

Michael Jackson angry with Eminem over new video
Arnold Schwarzenegger: ‘No regrets’ about steroid use
Advertisement