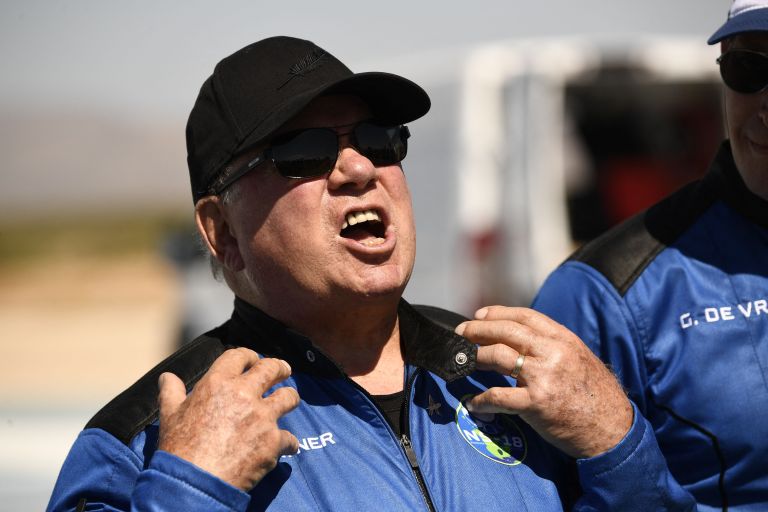 Police stated yesterday that the wife of William Shatner, the actor who played Captain Kirk in Star Trek, was found dead at the bottom of the couple’s swimming pool in the North Hollywood hills in what looked like an accidental drowning.

A saddened William Shatner burst into tears as he described his lovely blond wife as “the girl who meant everything to me.”

The 68-year-old actor appeared outside his Los Angeles residence, his face gaunt and his eyes red from sobbing:

“My beautiful wife is dead! I arrived home, and I found my wife at the bottom of the pool.

“She was everything to me. Her laughter, her tears and her joy will remain with me the rest of my life.”

Shatner attempted CPR on Nerine Kidd but was unable to resuscitate her.

Police Lt. Adam Bercovici said that foul play was not a factor.

“She was home alone for a short period of time and accidentally drowned while swimming in the family pool,” he explained.

“I arrived home and I found my wife at the bottom of the pool,” Shatner explained outside his home in the upscale Studio City neighborhood.

A post-mortem analysis indicated that Nerine Shatner was three times over the maximum alcohol limit for drivers in the state.

She was said to have a blood-alcohol level of 0.28 percent when she entered the pool.

Toxicology examinations revealed residues of the sedative medication Valium in her system as well.

Nerine Kidd was Mr Shatner’s third wife. They tied the knot in 1997.

Detectives have called her death a “tragic accidental drowning,” but they are investigating if alcohol had a role.

Kidd, 40, had been in rehabilitation for alcoholism twice during her marriage to Shatner, including one term at the Betty Ford Clinic, according to a recent Globe magazine piece.

According to a People magazine report of the wedding, he promised her, “I pledge allegiance to you, Nerine, my queen.”

“When it is dark and there is trouble, you need but wave that bauble and there will be light,” he said, referring to the ring he put on her finger.

The former model fractured her neck when she leapt or fell into the pool while alone at the couple’s house, according to the autopsy.

“The immediate cause of death is attributed to drowning associated with neck trauma, and the manner of death will be listed as accidental,” stated a coroner’s spokeswoman in Los Angeles.

He played the character again in a number of films, as well as in the cop show TJ Hooker and as the host of 911 Rescue, a show that recreates real-life catastrophes.

Fans of the show were devastated when DeForest Kelley, who played Dr. McCoy, died two months ago. He was 79 years old.